Black Sabbath's eponymous first album, released on 13 February 1970 in the United Kingdom, and on 1 June 1970 in the United States, has been commonly described as the first heavy metal album. This can be argued but what it’s clear is that it’s one of the first records to have all the key elements in place and its influence on the genre is unquestionable. From the occult lyrics to the guitar tone, the aesthetics of the band itself and, of course, the dark cover artwork.

The album's original UK release (Vertigo, V06) was a gatefold sleeve featuring on the front sleeve an eerie photography of a woman wearing a black cloak in a field beside a lake, with a water mill in the background. According to some sources[1],[2], the woman is holding a black cat though is very hard to see. A raven is visible among the trees on the back cover. The perfect image for the music enclosed on this album.

The sleeve was designed and photographed by Vertigo Records' in-house designer Keith Macmillan under the pseudonym Keef (also known as Marcus Keef, a frequent source of confusion). He is also the man behind the cover artwork of Black Sabbath’s Paranoid, Colosseum's Valentyne Suit and Rod Stewart’s UK solo debut An Old Raincoat Won't Ever Let You Down among many others.

Cover artwork of Black Sabbath’s Paranoid, Colosseum’s Valentyne Suit and Rod Stewart’s An Old Raincoat Won't Ever Let You Down.

He frequently used false color infrared photography[4], as in the Sabbath’s debut. Basically, where chlorophyll is present (plants, trees) a red tint is achieved using particular photo film, and the human skin can be green or pink depending the technique in use[5].

“I used to go to Keef” notes Olaf Wyper (the man who signed Black Sabbath to Vertigo Records) “and give him the music and say, ‘All right, listen to this and come back with some ideas.’ Without any precondition or anything else. And he knew that what I was interested in was the picture telling a story. The routine was, he would come back with some ideas, and he would show them to the art department and me, and we would look at them and say, Hmm, I think you can work on that one, don’t like that, don’t like all of them, like all of them. He would start usually with just some simple pencil sketches or a Polaroid or something like that. But usually it was sort of sketches and perhaps an odd… His girlfriend was very photogenic, and he used to take pictures of her, in Polaroid, and it would be something like this, but then of course it’s going to be treated in a particular way. His ability to come up with something arresting, powerful, that told the story, was indeed quite unique”[6].

Keef moved into music videos in the late 70s, collaborating with Kate Bush, Paul McCartney and Blondie among others.

”I started in the business as a photographer and sleeve designer” recalls Keef “About 1968 I started, I used to photo and design album sleeve covers and I did that for seven or eight years. I got a bit fed up doing that because I'd done basically over a thousand by then and I was just basically a little bored with it. And [I] really thought that the up and coming thing was film and specifically video tape for the music business. One of my early successes and one I'm quite proud of was one I did for Kate Bush […]. This was “Wuthering heights”[7].

The mill featured on the cover is Mapledurham Watermill, a historic watermill in the civil parish of Mapledurham in the English county of Oxfordshire. The mill is driven by the head of water created by Mapledurham Lock and Weir and is preserved in an operational state[8]. 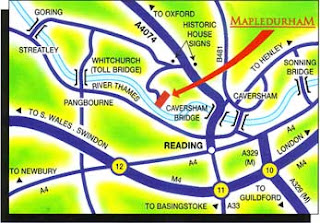 The mill is located in the grounds of Mapledurham House, and like the house is open to visitors on weekend and bank holiday afternoons from April to September. The water mill is normally working on opening days, and visitors can visit both main floors of the mill, and see (and feel) its operation[9]. The Mill at Mapledurham is the only mill on the Thames still working and producing high-quality stone-ground flour[10]. 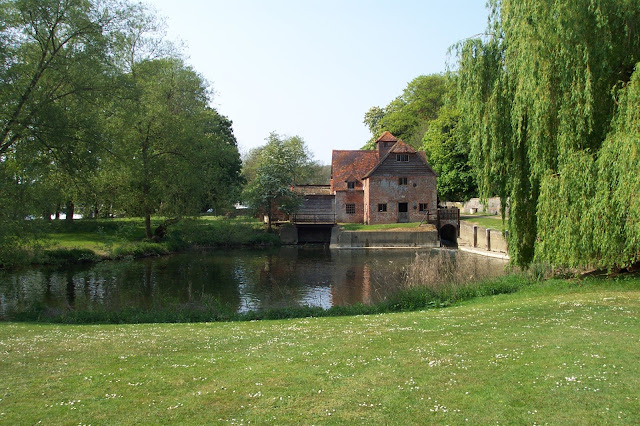 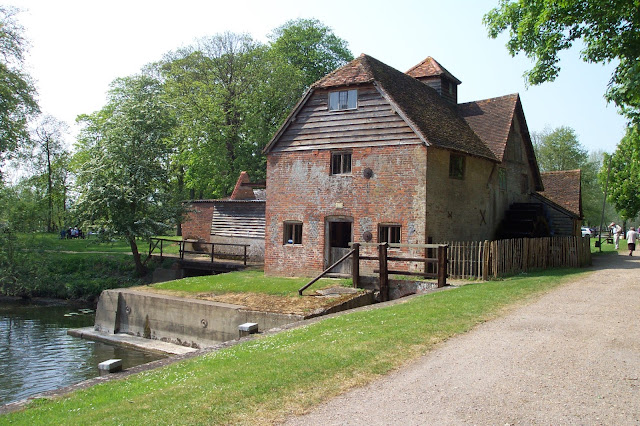 The watermill has been featured in several films and tv shows. Perhaps the best known example is its appearance in the 1976 film The Eagle Has Landed, directed by John Sturges and starred Michael Caine, Donald Sutherland and Robert Duvall. At the end of the movie the American troops blow up the mill. To protect the historic mill the movie crew built a false part in front of the real one. 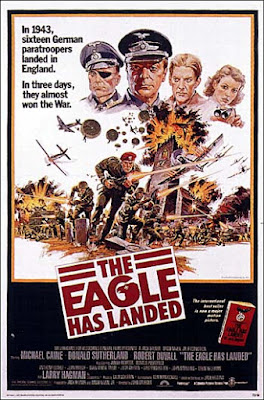 Poster of the film 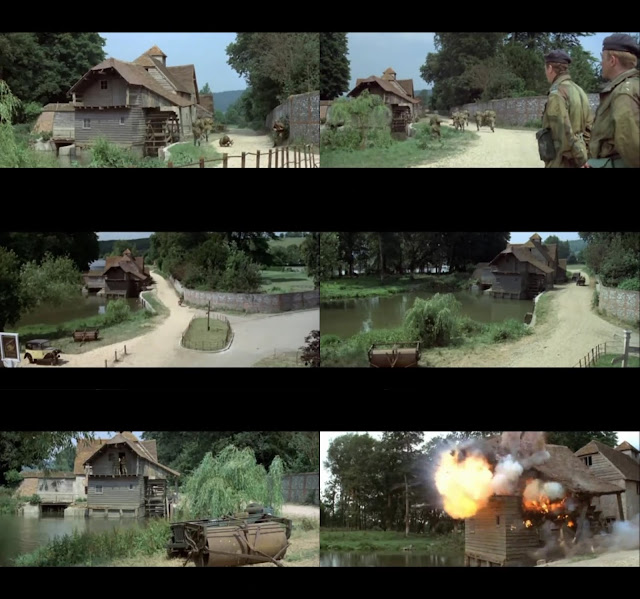 Screenshots of the film The Eagle Has Landed

The mill also appears in the introductory credits to the BBC television programme, Richard Hammond's Blast Lab, as the supposed hidden location of the underground lab.

It is also featured in the episode 'The Fisher King' of the British television detective drama Midsomer Murders, aired on ITV. 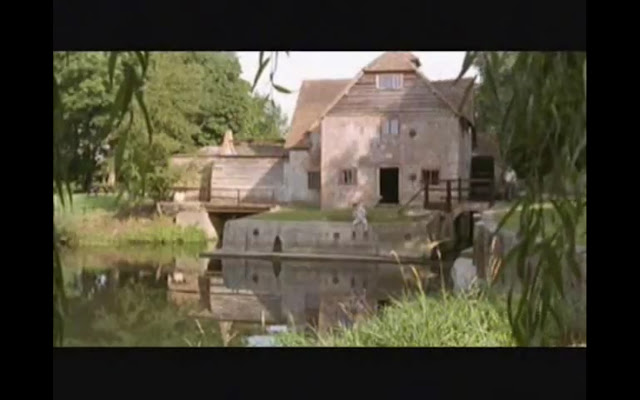 There are several rumors surrounding the strange woman on the cover. Some people said she was only someone passing by, others said she was the owner of the mill, or that it was an old witch living nearby. All of these don't seem likely. Other rumors claimed that she is Bill Ward's first wife. Others say that is Ozzy himself. These are completely untrue because the band has repeatedly claimed that they didn't have anything to do with the cover[11], [12],[13]. The craziest of all these gossip is the one that claims that there was no model, that they photographed the Mapledurham watermill and that this mysterious shape just appeared on the pictures out of nowhere…[14]

The reason for all these rumors is that there is barely any information about the girl. According to Pete Sarfas, from the now disappeared Black Sabbath Appreciation Society, she was an actress/model that was hired for the photo shoot[15].

A girl claiming to be the model in the photograph turned up at a Sabbath gig in Holland one night and spoke to Richard ‘Spock’ Wall who had just started to work for Sabbath as their tour manager at the time of the (first) album release. Spock didn’t know whether or not to believe the ‘model’, since there were all sorts of strange people rolling up at the gigs[16].

On the original UK release, the inner gate-fold sleeve featured an inverted cross with a poem and the credits written inside of it. Vertigo, the band's UK record label, were responsible for adding the cross. Allegedly, the band were upset when they discovered this, as it fueled allegations that they were Satanists or Occultists[17], Geezer in particular figuring, given his strict Catholic background, that his parents would freak when they saw it[18]. Sabbath complained that they had not seen the sleeve artwork and the inverted cross until it was too late to do anything about them[19].

“The record company came up with the artwork for the first album and had that inverted cross on the inside, plus the verse on the inside. That was out of our control, we weren’t allowed to have anything to do with mixing or album sleeves or anything like that.”  Geezer Butler[20]

However, in Osbourne's recent biography, "I Am Ozzy", he says that to the best of his knowledge nobody was upset with the inclusion.

"Suddenly we had all these crazy people turning up at shows," Iommi remembered in Mojo in 2013[17]. "I think Alex Sanders (high priest of the Wiccan religion) turned up at a gig once. It was all quite strange, really." The album was not packaged with a gatefold cover in the US. In the liner notes to Reunion, Phil Alexander states, "Unbeknownst to the band, Black Sabbath was launched in the US with a party with the head of the Church of Satan, Anton Lavey, presiding over the proceedings...All of a sudden Sabbath were Satan's Right Hand Men." 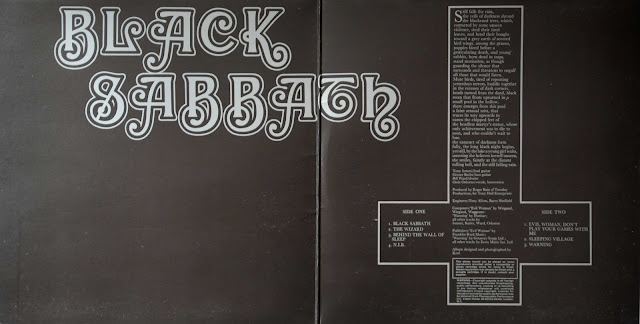 Note that Ozzy Osbourne is spelled on the sleeve notes as Ossie Osborne.

The album was not packaged with a gatefold cover in the U.S (Warner Brothers WS 1871) and several other countries thus losing the inverted cross.

On the mid-eighties UK re-release, on NEMS, the sleeve is the same as the original release, except that the inner sleeve background is white.

Poem
Still falls the rain,
the veils of darkness shroud
the blackened trees, which,
contorted by some unseen
violence, shed their tired
leaves, and bend their boughs
towards a grey earth of severed
bird wings. Among the grasses,
poppies bleed before a
gesticulating death, and young
rabbits, born dead in traps,
stand motionless, as though
guarding the silence that
surrounds and threatens to engulf
all those that would listen.
Mute birds, tired of repeating
yesterdays terrors, huddle together
in the recesses of dark corners,
heads turned from the dead, black
swan that floats upturned in a
small pool in the hollow.
There emerges from this pool
a faint sensual mist, that
traces its way upwards to
caress the chipped feet of
the headless martyr’s statue, whose
only achievement was to die to
soon, and who couldn’t wait to
lose.
the cataract of darkness form
fully, the long black night begins,
yet still, by the lake a young girl waits,
unseeing she believes herself unseen,
she smiles, faintly at the distant
tolling bell, and the still falling rain.

Commonly, the font used for the title on the cover is referred as Manuscript Capitals by Letraset. It isn't exact, but it's close. The copyright for the font in the Letraset catalogue says ©1972, two years after the release of the album. The font doesn't exist in digital form, at least not commercially[21]. 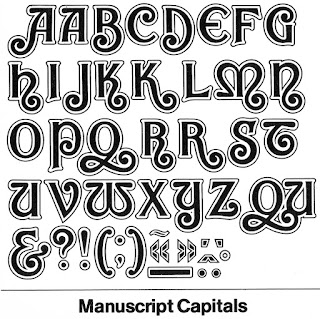 Fonts: Original cover font (up) vs Manuscript capitals font (down)


The Manuscript Capitals font is used on the cover of Kingfish' eponymous debut album (1976). 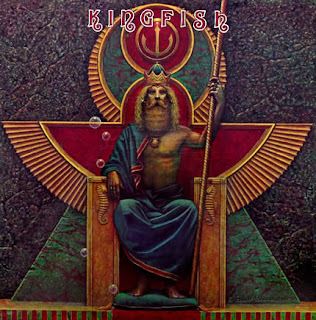 This is not meant to be an exhaustive list. For more exhaustive information on the different international releases go to: http://www.sabbath.se/Discography/blacksabbathvinylLP.html or http://www.discogs.com/Black-Sabbath-Black-Sabbath/master/723

Evil Woman is on non-US releases of BLACK SABBATH. On US releases it is replaced by Wicked World. 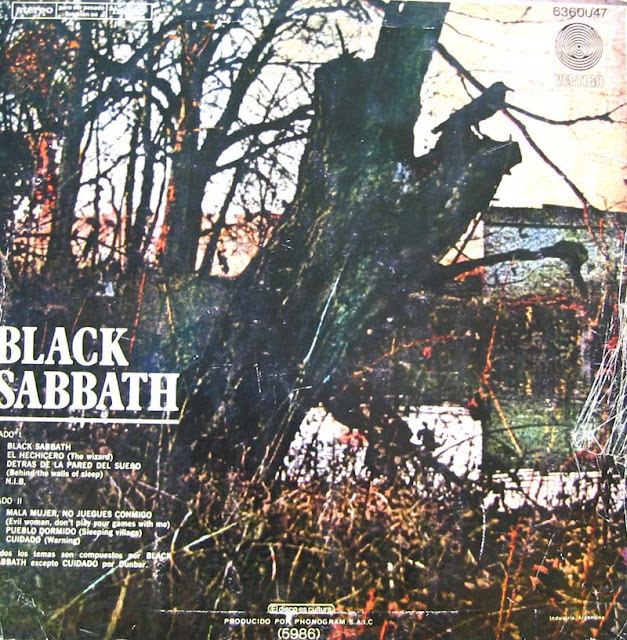 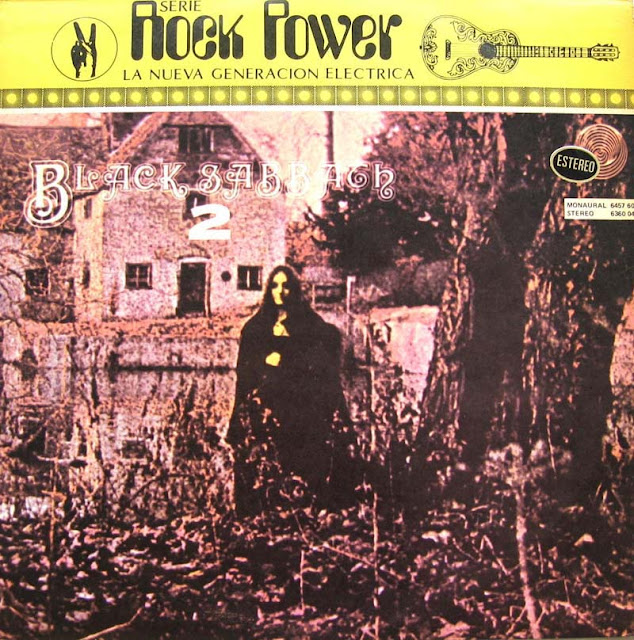 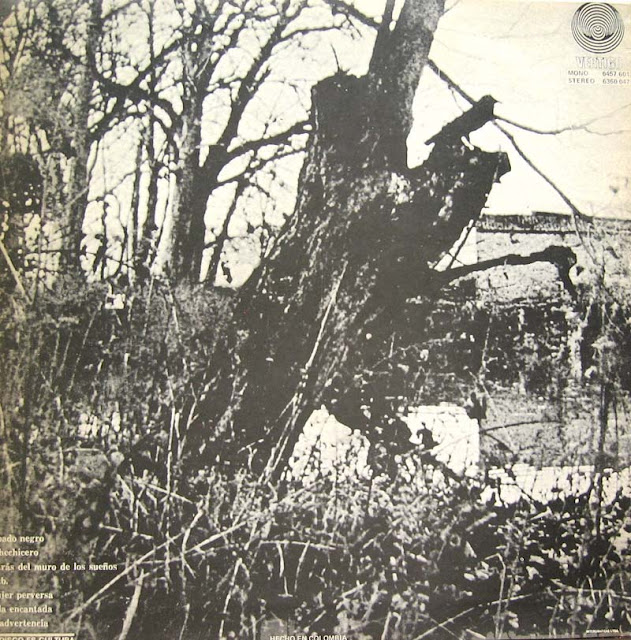 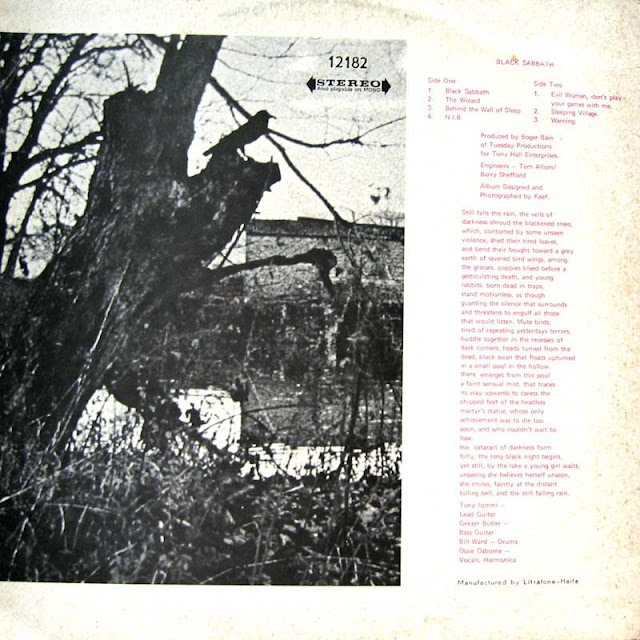 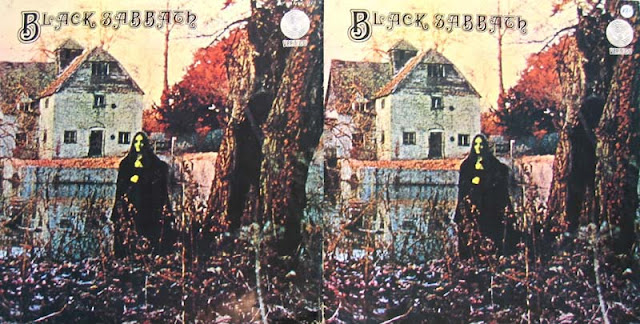 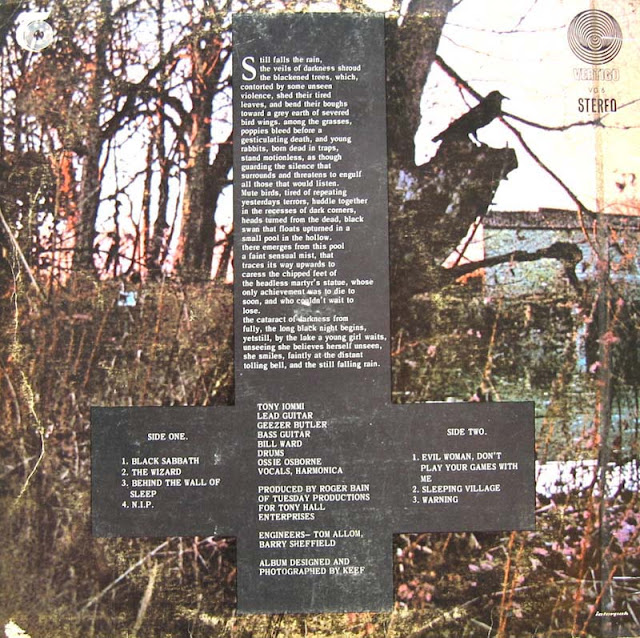 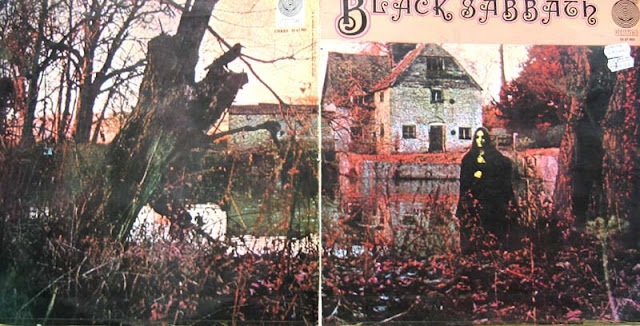 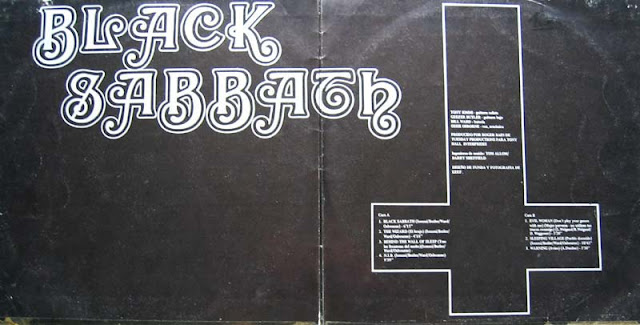 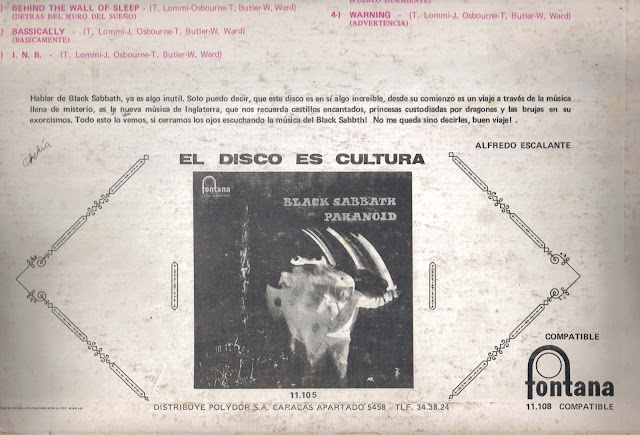 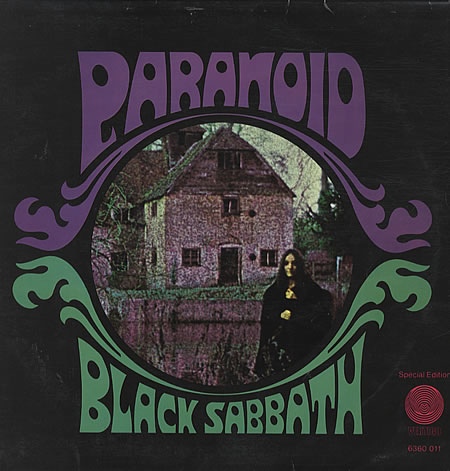 The packaging of the Japanese psychedelic band Acid Mothers Temple’s album Starless and the Bible Black Sabbath (Alien8 Recordings 2006) is a reworking of the original cover of Black Sabbath’s debut, only this version features AMT’s Kawabata Makoto in the cover photo instead of the woman[22].The title refers to the King Crimson’s album Starless and Bible Black (1974) and a self-titled album by Black Sabbath. This isn’t the first time (nor the last time) that this prolific group (here with the appendage Cosmic Inferno) reworks an iconic cover or its title (e.g. Son of a Bitches Brew, Dark Side of the Black Moon, Are We Experimental?, Minstrel in the Galaxy and Electric Heavyland). 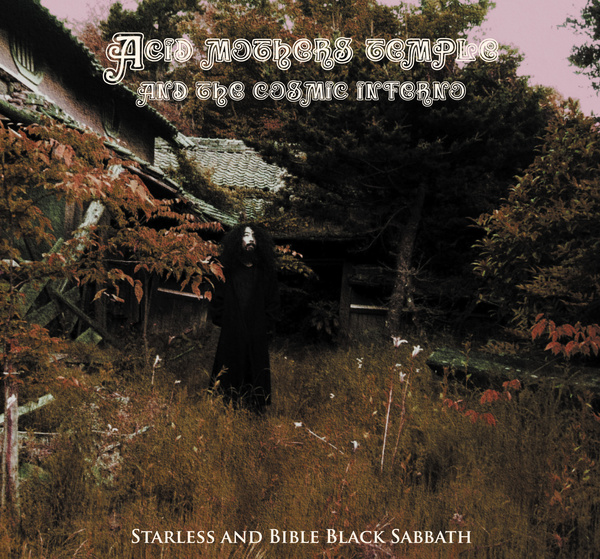 Hardcore punk band BL’AST!’s 2013 album, entitled Blood (Southern Lord Records 2013) and composed of unreleased mid-80s material, also mimics the cover of Black Sabbath’s debut,  with the use of infrared photography and a strange woman staring at the viewer. 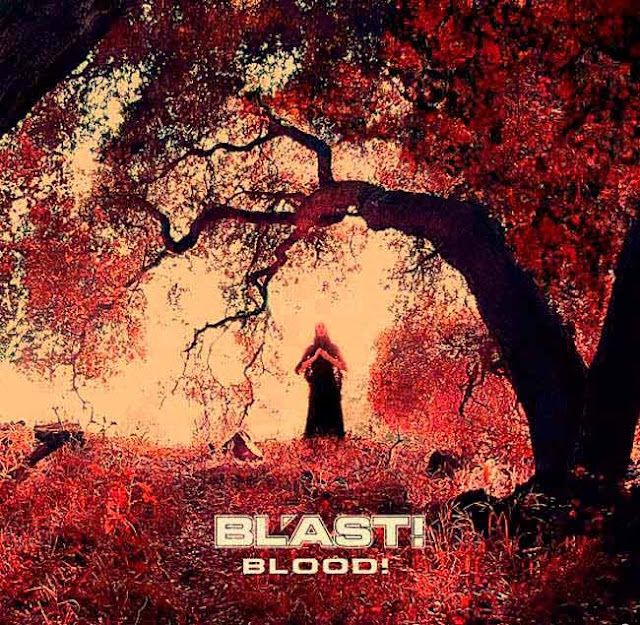 Illustrator Tim Bower did a painting of the band in front of the watermill for the Rolling Stone’s special issue "100 Greatest Artists". 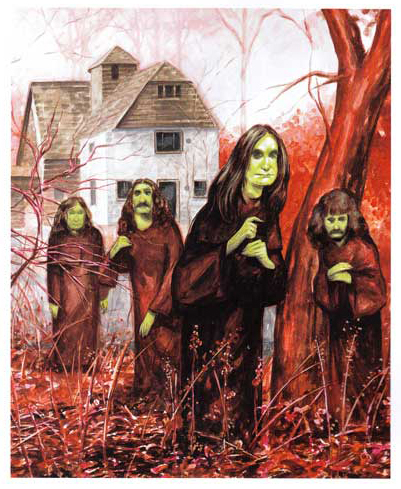 ALBUM COVERS GALORE is a blog dedicated to -you guessed it- the art of album cover design. We choose album covers with an interesting story behind and try to gather from all over the web as much information and little details as possible. Hope you enjoy it.